My Read of the Month: 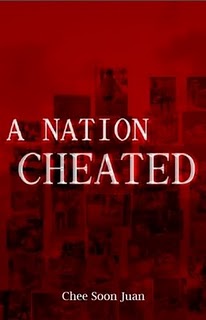 Without a doubt Dr Chee Soon Juan cuts a very controversial figure in Singapore politics. Some respect him while some or most loathe him, especially for his confrontational antics with civil disobedience.

However, we cannot deny that this man’s fortitude in standing for his democratic beliefs in spite of the constant hammering dished out by our PAP leaders baffles many of us. And it did provoke me to consider about this man’s intentions and aspirations for Singapore and to read this book.

This book surmises Singapore’s political history (based on historical records) and how the PAP came into absolute power that it is today. And unlike what we were mostly told by the media and in schools, Dr Chee attempts to present the untold version of the PAP’s unscrupulous mannerism in usurping power using the ISA to detain political opponents.

Many of these political opponents were imprisoned without trial as long as 25 years. One notable character whom should have been Singapore’s first prime minister was the late Lim Chin Siong. He was a respected leader of the masses who valiantly fought for the rights of Singaporeans and their desire for independence from the British rule.

Interestingly, he was against the meager with Malaysia. That allegedly led him to be detained by the ISA on grounds that he was a communist. He was locked up twice on accusations for his communist links but was never trialed and convicted. He was subsequently banished to London in 1969 and only allowed to return 10 years later.

With Lim and an opposition out of the way, Lee Kuan Yew and the PAP took control of the independent press and active trade union movement. And they say the rest is history. In 1996, Lim passed away unceremoniously.

Not everything in this book is about the late Lim, but his story and his fate is pivotal in how the tide turned in favour for the PAP to reign. The rest of the book recounts the history of the degenerating of our labour laws; the dependency of MNCs and use of GLCs; and the transparency of our sovereign wealth funds with Temasek Holdings and GIC.

Overall, this book appeals even to the average man on the street. It shares the other side of history which has been blacked out. So one ought to read with an open and discerning mind, and conclude for yourself the true Singapore story.

And the truth is important,  for history defines who we are as a people, and don’t we wonder why there is no true identity or true sense of belonging as a Singaporean?

Who should read it: All Singaporeans and anyone who’s interested in the making of Singapore’s success.