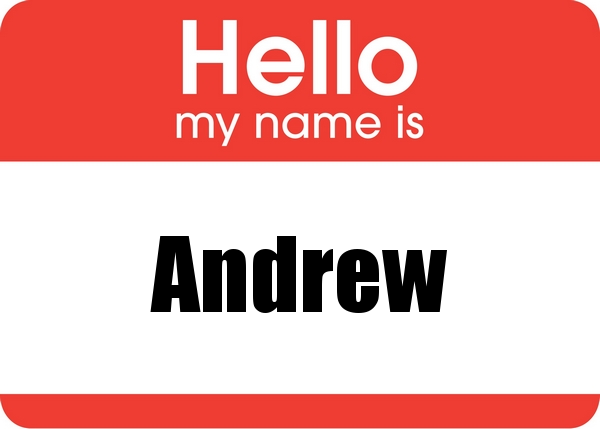 Unknown to most, Andrew is actually my rebirth or baptized name. My birth name, which was given by my parents is Kelvin.

It was God who gave me the name “Andrew” during the period when I was due to be water baptized.

While spending time with God, I was reading the scriptures and came to the part where Jesus Christ invited Peter and Andrew to follow Him.

I had an encounter with Jesus!

That same week at a church service, the passage that was preached was… YES you guessed correctly! It was about Andrew!

The preacher taught how Andrew was evangelistic who brought people to Jesus including his brother, Peter.

I didn’t really want to believe this as a confirmation and regarded it as a coincidence.

The next following week at the church service. My younger brother joined me for the first time upon, he responded to receive Jesus Christ during the altar call.

As like most altar calls, my younger brother left his seat to approach the stage area to where the pastor was. I accompanied him. And after he prayed to receive Jesus with others as well, the pastor walked towards us and spoke to us.

He asked my brother’s name and mine. And we told him we were brothers. At that remark, the pastor shook my hand enthusiastically and affirmed me saying, “Wow! You are an ANDREW!”

Could you imagine that???

If that was not convincing enough for me, God pulled another trick just for His own pleasure just to prove a point.

I have always been a huge fan of Manchester United Football Club and follow closely to their games and developments. Therefore, I know the names of every player of this team.

That following week while reading the papers on the team, I realised the name of their prolific star striker, Andy Cole had suddenly changed. And that was the name he was known as since he started his career!

Till today, there hasn’t been a clear explanation why Andy Cole changed his name from that time onwards. And it had to happen during that period!

What are the chances of that happening?! God truly knew how to get my attention and to convince me to accept the change of name!

My new identity in Christ

Now 15 years as Andrew, I understand and appreciate why God took all that effort to change my name.

Like how He did so for many of the biblical characters in the Bible such as Abram to Abraham, Jacob to Israel, Simon to Peter and so on, He did so to establish a new identity for that person.

The old me (Kelvin) is now no more and the new has come. Now in Christ, I am Andrew with a new mission in life ordained by God and I embrace His call.

I know for a fact the kind of person the old me called Kelvin is. And there’s nothing good in him. This new name not only reminds me that this new life that I have I now live consecrated for Him, but also to firmly anchor me in my new destiny in Christ.

I’m no longer looking back, I’ve decided to follow Jesus!